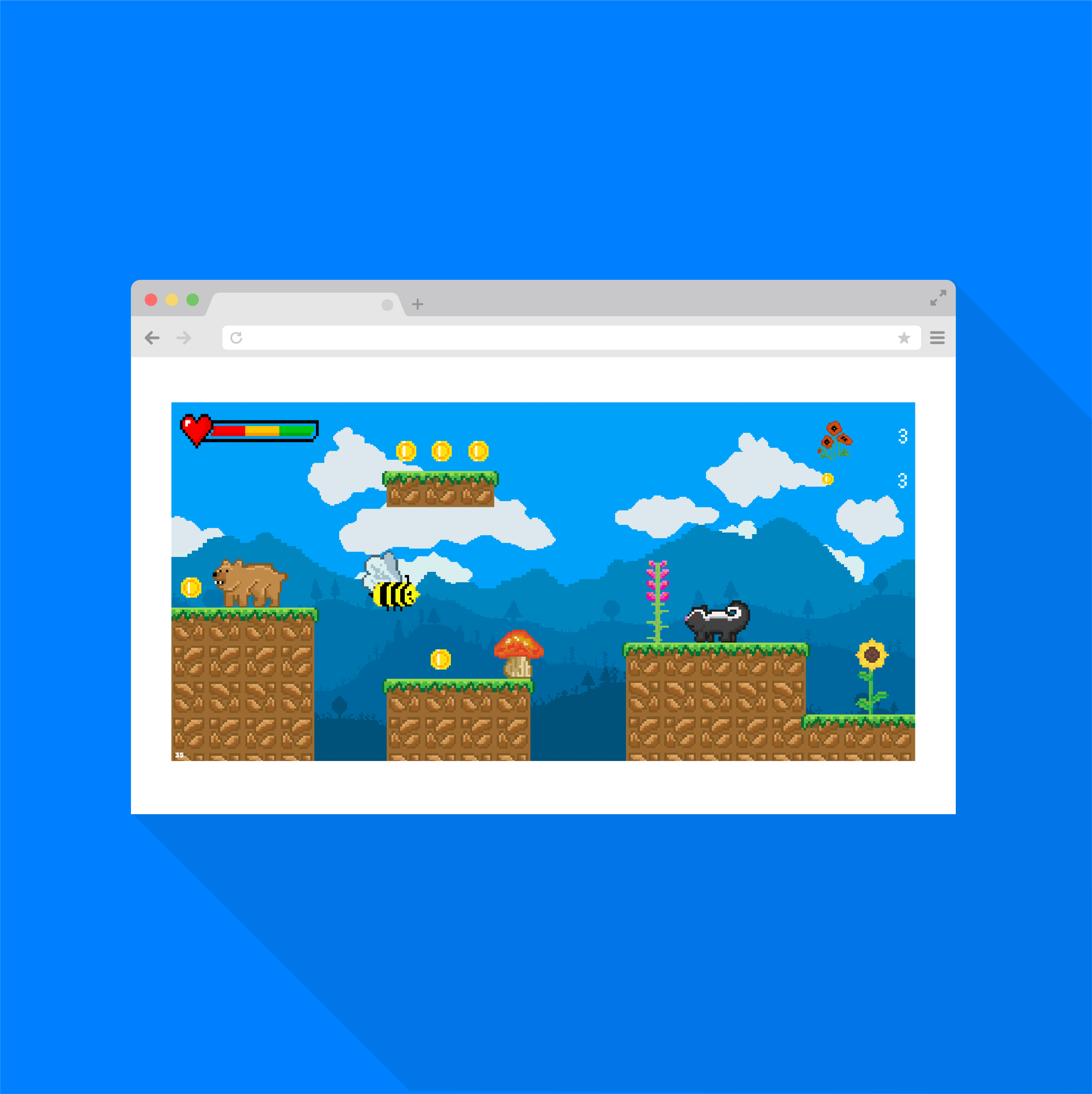 2D game design experience
Duration
4 months (Fall 2021)
Credit
Instructor:Dermot Mac Cormack
Tools
Unity (C#), Aseprite, Corgi Engine, Adobe Suite
Delivered
Research, Concept, Pixel Art, Complete Level
Nectar Collector is a wholesome pixel art 2D platform slider game. Collect nectar, gather coins, and take out the honey bees' natural enemies before returning home to the hive.
Context
Nectar Collector serves as a fun retro-inspired game as well as a learning tool for those who engage with the game. Some of the honey bees favorite flowers include lavender, snapdragons, sunflowers, and poppies, which are all known for their unique shapes, colors, and scents.
‍
The main character is a honey bee named Nectar, looking to pollinate plants near their hive while avoiding obstacles and natural predators.
‍
The game also teaches players about some of the honey bees' natural-born enemies such as skunks and bears. Skunks are insectivores, and when they discover a hive, they often return at night to attack the hive and eat large quantities of bees. On the other hand, bears are just interested in the honey the bees produce. Bears can be quite destructive and can destroy an entire hive in one sitting by ripping it apart or tipping it on its side to get to the honey. In my game, I decided to implement both skunks and bears as AI-controlled enemy characters.
Overview
How can I design a game using unfamiliar software quickly and efficiently?

How can I establish a balance between a challenging yet lighthearted game experience which would appeal to the vast majority of players?

Where can I bring in a fresh take on the users' experience of gameplay?
Challenge
To begin my research for this project, my class and I spent some time researching games, their development process, and their creators. We looked at popular games throughout history and discussed the differences in their gameplay. We also researched indie game developers and analyzed examples of fully developed games that were designed and created by just one person or a small studio.

This inspired me to think about what kind of game I wanted to create. I personally have always gravitated towards retro games. I can still remember the warm fuzzy feeling I would get playing Super Mario Brothers and Mario Kart Racing. My goal for this game was to recreate that feeling of nostalgia and simplicity.
Collecting Thoughts and Ideas
I knew I enjoyed retro game design but I wanted to ensure other people would too. I sought to find out why these games are so appealing and who is playing them. Wired dug into "Why Retro-Looking Games Get So Much Love" and the psychology behind our affection for retro gaming stating it’s only partly to do with nostalgia for the past.
I learned that one of the most important parts of creating a timeless game experience is the seamlessness game feel. This notion pointed out the importance of the universal experience within the world I'm creating my game for. In Wired article they had the opportunity to interview Chris Schranck, aka FutureManGaming on Twitch, talking about the importance of game feel, and his memories with retro video games.
“Playing retro games,” says Schranck,“you’re happy to be feeling like a kid again. As an adult, you have all these responsibilities and anxieties, and if you can just find a way to forget about that, even just for 15 minutes, it can help. I think if you can find something, anything, that can help you feel good, that’s a good thing. Retro games evoke these happy memories. Being a kid, opening up that new game or console on Christmas. How it looks, the beautiful pixel art. It’s the nostalgia, and remembering being young again.”
Secondary Research 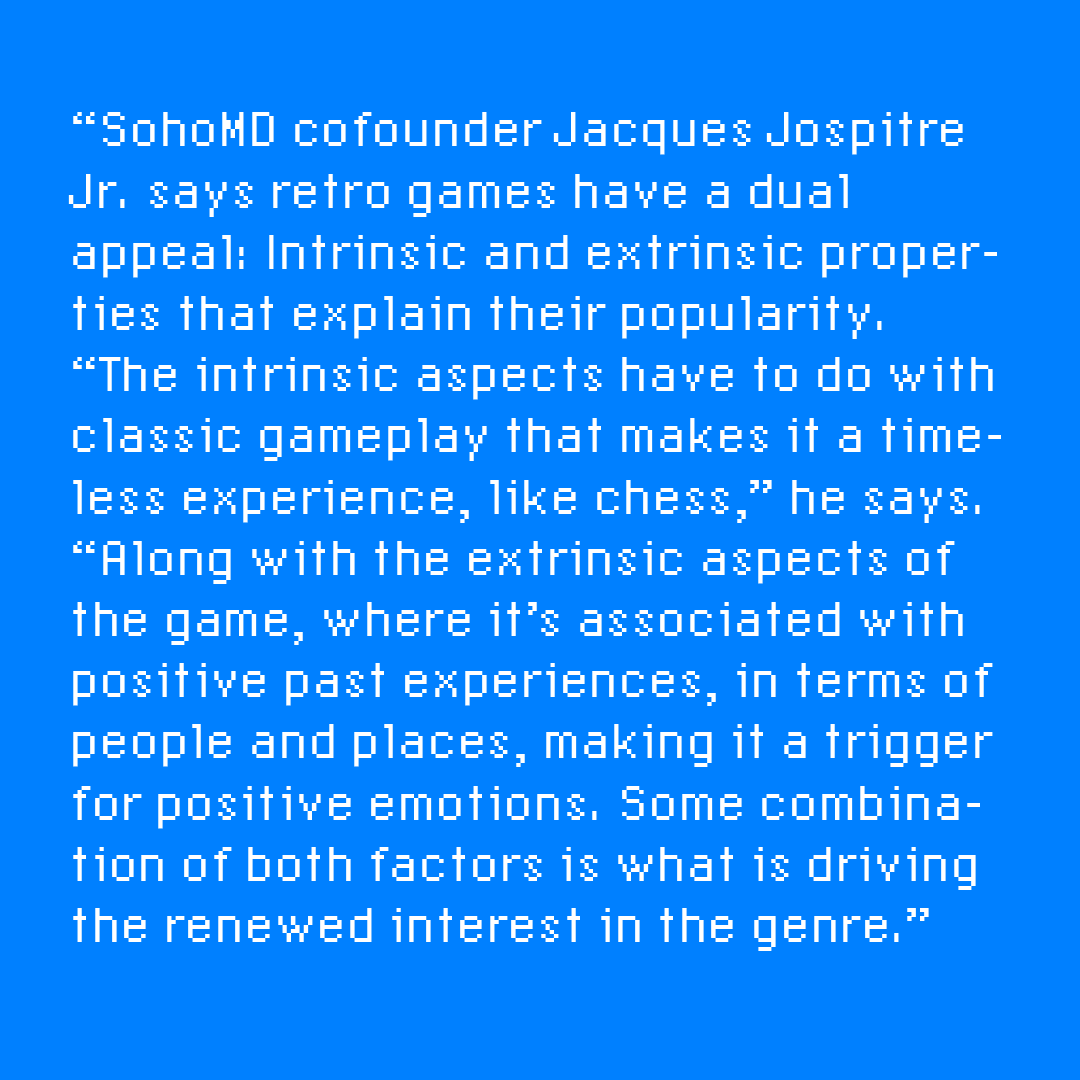 This led me to brainstorm ideas and concepts. I started by creating a mind map of what my 2D game could look like. I landed on a game centered around a honey bee and its task of pollinating flowers.
After solidifying my direction, I created a storyboard. This process gave me quick insight into the user flow, the scenes I would develop, the layers I would use for the background, objects I would want the player to interact with, and how I would want the users to navigate through the game.
Concept Development

Total immersion was an important part of the gameplay's consistency. I wanted my users to feel universal consistency in the world of Nectar Collector while embodying the feeling of nostalgia that retro games have. I designed all the pixel art illustrations and visuals in an 8-bit style. This was my first time creating pixel art, so I had much to learn and wanted my process to be as efficient as possible. To assist in the process of generating pixel art, I used a tool named Asprite. Asprite has a learning curve of its own, but I took things one pixel at a time.
Visual Design Direction
After watching countless tutorials and completing practice exercises to learn the ins and outs of Unity, I knew the best thing to do would be to jump straight in.  I began by creating a set of tiles and imported them into Unity to start mapping out the scene. While placing tiles that would act as the platforms, I considered the users' experience of entering and flowing through the scene. I decided to start the level with long, flat platforms that are easy for the user to land on. Then, as the player moves farther through the level, the platforms become shorter, more rigid, and some even move up and down.
Tile Mapping 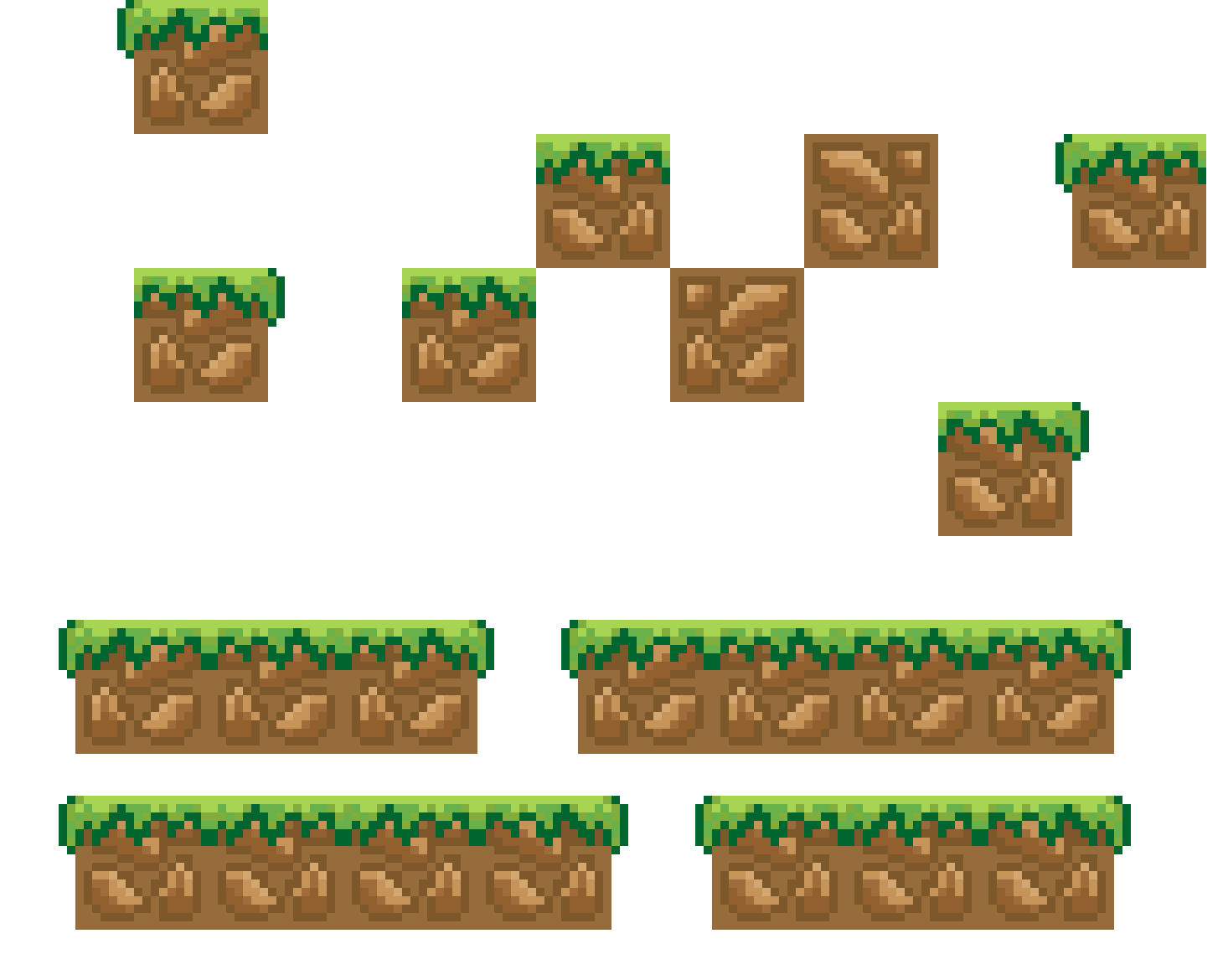 Many of us are familiar with camera movement in movies and TV shows being used to help tell the story, style, or mood. In game theory, the camera is used to let players see what they are doing and help direct them to where they may want to go. I chose to use multiple different cameras to add depth to the scene. One of the methods in which I did this is by adding a camera parallax effect to the background layers. By doing so, the background layers move at different speeds making the background appear more dynamic. The most important camera is the one that follows the main character throughout the level moving both horizontally and vertically. This camera urges the player to keep flying forward or they will run out of time and the edges of the landscape will catch up with them.
Camera Movement

Controlling the main character is simple by design, and is done with the keyboard by using either WASD or arrow keys. When the user presses any of these keys, Nectar moves from the idle animation into the flying animation, flapping its wings faster and moving its legs. From the moment players start the game, Nectar is constantly in flight - buzzing and ready to go!
Main Character
Idle
Flying

While creating the enemies, I wanted to reinforce the fact that although both the skunk and bear are designed to appear cute on first impression, they are in fact the honey bees' natural enemy. To communicate this, I animated both the skunks' and bears' eyes to flash red as a warning signal for Nectar to steer clear.
System 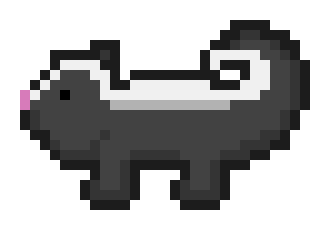 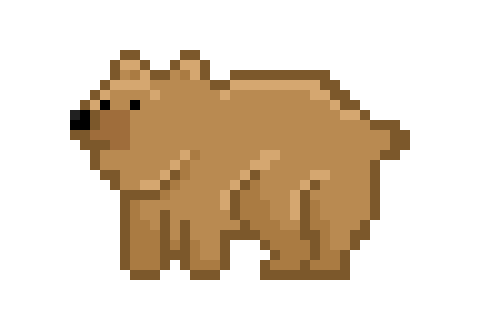 Idle
Attack
I also created a series of animations for the flowers applied to interactive systems to indicate to the player which objects they can be engaged with.

Idle
Nectar Collected
I designed various visual and audio feedbacks to better the user experience during gameplay. I focused on creating feedbacks that would trigger on game events, often by combining both visual animations and audio effects at the same time. These feedbacks made just about any event or action distinguishable and more enjoyable.
Feedbacks

The above clip demonstrates the main character's interaction when pollinating a flower. When the honey bee comes in contact with the flower, it transitions to the flower pixel-pop animation and triggers a chime sound that lets the users know that they have successfully pollinated the flower. This interaction also triggers an event that increments Nectars pollination count, located in the upper right corner of the window.

As originally planned, I wanted to create a tool for the players to use to boost them a bit faster through the air. I did this by creating bouncy mushrooms. They are scattered in different locations on the level at the edges of platform blocks. The idle state of the mushroom is a bouncing animation, indicating that the mushroom is able to be interacted with. When Nectar lands on the mushroom, it propels nectar forward.

Adding coin collection was a late-stage decision that strengthened the gameplay and its consistency heavily. Collecting coins adds an extra level of difficulty to the game; the player's main goal still remains collecting nectar and avoiding its enemies. The coins serve as another positive feedback for the user. When a coin is collected, a chime sound effect plays, the coin disappears, and Nectar's coin count is incremented.

Players do have to be cautious of Nectars' enemies. The enemies come in two forms - skunks and bears. Luckily, enemies are able to be eliminated by stomping them directly from above. However, if Nectar is touched first by either the bear or skunk, Nectar will fall to the ground and will be reset to the beginning of the level. This is indicated by Nectar flashing red and then falling out of the game frame.
The user journey through the level was important to maintain a balance between challenging and easy since this is a game that appeals to the masses. It is reasonably easy enough to avoid the enemies and reach the end of the level but can prove to be difficult to accomplish while also pollinating flowers and collecting coins.
Journey 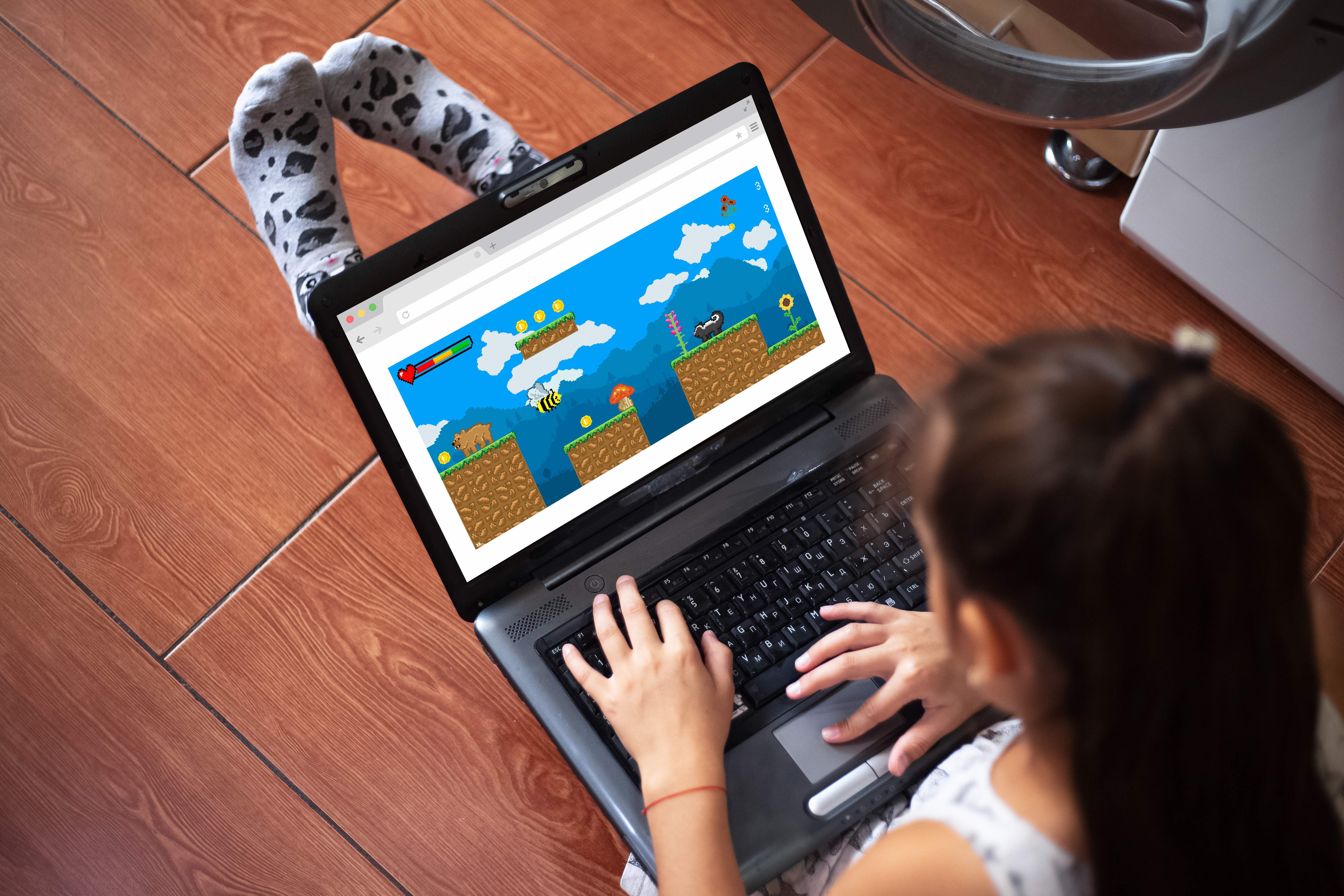 Total immersion would not be possible without background music and audio feedbacks. I would like to thank Kevin MacLeod and his song Half Bit, as well as other sounds used to amplify the gameplay.
Music
This project had me step outside of my comfort zone every step of the way. I constantly had to problem solve from learning new software to considering how to better user experience during gameplay, expanding my illustration skills, and working through trouble-shooting.

With more time I would expand this game exponentially from multiple levels to different worlds to fly through, adding more natural enemies, as well as a shop to spend the collected coins. I would also love to see Nectar Collector as a game on a mobile app or on a handheld gaming console like the Nintendo Switch.
Reflection
Oliver
Rethinking how we compost at home
Plantopedia
Demystifying houseplant care

Have a question, feedback, or are in need of some houseplant advice? Please feel free to reach out.